The statement I made on Brexit in Dáil Éireann, Monday June 27th 2016 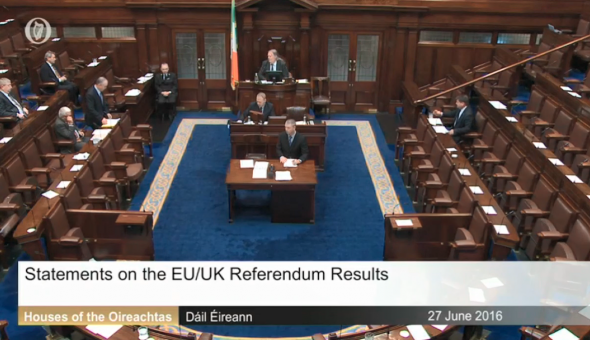 Deputy Seán Haughey: Yeats once wrote that everything is changed, changed utterly. We are not entirely sure what Thursday’s vote is going to give birth to; a writer to the letters page of the Irish Times today finished off by stating that a terrible future is born. That remains to be seen, but I am apprehensive about the consequences of Thursday’s vote. I am generally sad about the outcome of the referendum. Of course, as democrats, we accept the decision of the British people but most Members are disappointed with the recent turn of events. Like many people, I strongly believe in the values and ideals of the European Union. For all its faults, and there are many, the EU has brought unprecedented peace and stability in Europe since the Second World War. Among other things it has ensured rights for workers and equal pay for women. The EU has achieved all of these things over the years.
We live in an uncertain world economically and in many other ways. Certain states to the south of Europe are simply not functioning. The threat posed by Russia to the east cannot be underestimated. International terrorism threatens our fundamental way of life. The rise of the extreme right and extreme left movements are putting the centre under pressure. Extremism and hatred pose real challenges for our liberal democracies.
This vote was divisive in many ways for the United Kingdom and the EU. It has the potential to destroy unity and consensus at a European level. The leave campaign was ugly and nasty. It was negative and angry. This ignorance and intolerance is on the rise in other EU states as well. Old prejudices are being stoked up. Fundamental or extreme nationalism is on the rise. As a result, eurosceptic parties are growing in Europe. This dangerous populism poses a real risk to liberal democratic values and at times it seems reason and common sense are discarded and the politics of protest takes over.
Of course the EU institutions have questions to answer. Even if the vote to remain had prevailed, serious soul-searching would have been required. There is a growing disillusionment with the so-called political establishment, the elite and the experts. The EU faces many challenges. The 2008 financial and banking crisis is still being played out. A resurgent Russia poses a real threat as does the influx of immigrants. The citizens of the EU do not believe the institutions are handling these crises well. The disconnect between the EU institutions and citizens is a real issue. It is not simply a question of poor communication, although that question needs to be addressed. The EU is perceived as increasingly remote. It has an alienating style and can be seen as autocratic or high-handed. The view is that citizens are talked down to rather than talked to. Indeed, the meeting of the six foreign Ministers of the founding fathers over the weekend was an illustration of this, and the democratic deficit needs to be addressed. An ongoing programme of constructive reform of the European Union is needed now.
Many of us recall the patriotic visionaries who founded the EU. As Deputy Micheál Martin said this morning and in contributions last week, the founding fathers of the European Union or EEC were patriotic. The generation led by Jacques Delors, the former President of the European Commission, François Mitterrand and Helmut Kohl were visionaries. They were leaders with a vision and they had a real sense of solidarity. It seems that today the major political figures of the European Union are reverting wholeheartedly to national self-interest, and that is regrettable.
It is interesting to note that, by and large, young people supported the remain side in the UK vote. Their sense of idealism needs to be encouraged and supported. The EU is something more than a partnership of nation states but it should not become a federal super-state either. Any further integration or expansion proposed by the EU will have to be clearly justified and fully explained to the citizens of the European Union.
Where do we go from here? Ireland has a unique relationship with the UK economically, culturally and socially. We need to preserve this unique relationship in the negotiations to follow. Ireland needs to be at the centre of these negotiations given our unique relationship with the UK. The exit of the UK will have more of an impact on Ireland than any other EU state. We need to be calm, reasoned and rational to protect our national self-interest. However, we also need to work closely with other EU member states to ensure the survival of the Union and all that it stands for.
I realise my time is running out but I am keen to assure the Minister of State that we are all wearing the green jersey. Those of us on this side of the House will be fully supportive of the efforts to protect our national interests and to get the best possible outcome from the negotiations to follow.
It is regrettable that a vast amount of time, effort and resources will now have to be expended by Government and our public administration generally to try to sort out these issues in the coming two years. This is unfortunate and it will slow down policy-making in many important areas of Irish life. Be that as it may, we are where we are and we need to pick ourselves up and do what we have to do to protect the interests of the country.