Seán was born in 1961, is married to Orla O’ Brien from Raheny and has four children, three boys and one girl. Having always lived on Dublin’s Northside, he attended St. Paul’s College in Raheny before completing a B.A. degree in Economics and Politics in Trinity College Dublin.

He represented Fianna Fail nationwide as National Chairman of Ógra Fianna Fáil and as a member of the National Executive of the Party.

He has always taken an active interest in local affairs and served on various local bodies including the boards of Beaumont Hospital, the Orthopaedic Hospital in Clontarf, St. Vincent’s Hospital in Fairview and the Northside Partnership Limited. He is fully committed to the preservation of the Dublin Bay Biosphere as an amenity for all.

As the youngest ever Lord Mayor of Dublin in 1989/1990 he was instrumental in initiating proposals for the re-development of Temple Bar as a cultural quarter and the promotion of the scheme to pedestrianise City Centre streets. Read More About Sean As Lord Mayor

He has consistently opposed any liberalisation of the laws in relation to gaming arcades and resort casinos.

Sean has also been very active in the campaign to preserve the terrace of houses on Moore Street as a National Monument following the centenary of the 1916 Rising.

As a TD for Dublin Bay North, Seán continues to successfully lobby for significant investment and facilities for his constituency in the areas of education, health, transport, parks, sport and social, cultural and community activities.

Between 2002-2004 he was Vice-Chairman of the Joint Committee on European Affairs. He was among the first Irish parliamentarians to raise concerns about the Turkish application for membership of the European Union.

He is a strong supporter of Ireland’s traditional policy of military neutrality.

Between 2004 – 2006 he was Chairman of the Joint Committee on Environment and Local Government and in that capacity voiced his opposition to the proposed M3 Motorway through Tara. Under his chairmanship, the Committee published a comprehensive report on the recycling of household waste in Ireland.

He was also instrumental in the introduction of a landmark amendment to the new Planning and Development (Strategic Infrastructure) legislation which outlawed any future development of nuclear installations in Ireland.

He was a Minister of State at the Department of Education and Skills from 2006-2011 and had special responsibility for Lifelong Learning, Educational Disadvantage and School Transport.

He coordinated and advanced the implementation of the National Skills Strategy so that comprehensive upskilling and re-skilling opportunities were available for the workforce, including the unemployed, to ensure that we had a well-educated and highly skilled population, contributing to a competitive, innovation-driven, knowledge based, and inclusive economy.

He also commenced an evaluation of the DEIS (Delivering Equality of Opportunity in Schools) Programme with a view to preparing a new framework to tackle the problem of disadvantage in our schools.

Finally, in January 2009 he initiated the first comprehensive value-for-money review of the School Transport Scheme since the 1960s. This was published in March 2011 and as a result of this major reforms to the Scheme were announced in the 2011 Budget. Read More About Sean As Minister for State

In 2012 he joined the voluntary committee of the Cleft Lip and Palate Association of Ireland(CLAPAI) and in 2017 he became a member of the Advisory Board of Suaimhneas Clubhouse which is a mental health organisation based in Raheny Village.

He is also a member of European Movement Ireland and the Institute of International and European Affairs (IIEA).

From 2014 – 2016 Seán was a member of the City of Dublin Education and Training Board (CDETB), the Board of the Commissioners of Irish Lights and the Moore Street Advisory Committee. He was also on the  Dublin City Council Strategic Policy Committee on Arts, Culture, Leisure and Youth Affairs and the associated 1916 Commemorations sub-committee. In addition, as a member of the CDETB he served on the Boards of Killester College of Further Education (Chairperson), and Coláiste Dhúlaigh College of Further Education. 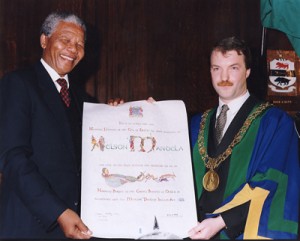 Sean Haughey was elected Lord Mayor of Dublin in 1989 at the age of 27 and is the youngest Lord Mayor to date.

During his one year term he convened the “Temple Bar Development Committee” the findings of which were adopted by the Government and which led to the foundation of Dublin’s cultural quarter.

He also speeded up the programme of pedestrianisation of city streets which commenced during the very successful      Millennium Celebrations. As part of this programme a time capsule was buried in Dublin’s North Earl Street.

Another feature of his year in Office was the development of an employment and investment initiative for Dublin through  the establishment of a close relationship between the Lord Mayor, the City Council, the Trade Unions and the Dublin Chamber of Commerce.

He also took a very special interest in organisations working with the disabled throughout the city.

As Lord Mayor, he presided over the city’s preparations for it’s term as European City of Culture and Ireland’s EU Presidency.

On May 25th 1990 Sean Haughey was made an honorary Chief of the Choctaw Nation of Indians by Chief Roberts at a ceremony in the Mansion House and was presented with the traditional Indian head dress.

On his last full day in office he hosted a civic reception in College Green to welcome home the victorious Irish soccer team of Italia ’90.
Finally, on the same day, July 1st 1990, Seán Haughey had the great honour of bestowing the Freedom of the City on the South African Leader, Nelson Mandela.

The promotion of Further and Adult Education as part of the Lifelong Learning agenda was a central part of his work.

The aim of Further and Adult Education provision was to offer access, transfer and progression opportunities to learners. The main purpose of courses was to provide a range of supports to people who had left school early or who needed further vocational education and training to enhance their employment prospects and to enable them to progress their education up to a standard equivalent to upper secondary level. Further Education courses were provided at Levels 1-6 on the National Framework of Qualifications.

Adult and Further Education was a significant factor in addressing the upskilling needs of the workforce and in creating a more cohesive society.

The following schemes were provided as part of this programme;

Despite a serious problem with the public finances he managed, by and large, to maintain significant, year on year, the funding allocation to Further and Adult Education.

He published a Value for Money Review (VMR) of Youthreach and Senior Traveller Training Centres in April 2008 and commenced the phasing out of segregated education for Travellers as recommended in the VMR.

He abolished the fee for the BTEI for those learners with less than an upper second level education.

He approved Ireland’s participation in the OECD’s Programme for the International Assessment of the Adult Competencies (PIAAC) to ensure up-to-date information was available in relation to adult literacy.

He secured funding in the April 2009 Budget for the provision of an extra 1,500 PLC places bringing the total number of places up to 31, 688.

The development of skills and training policy was also a crucial aspect of his Ministry and he had a key role in the implementation of the National Skills Strategy.

The National Skills Strategy (NSS) was published in 2007 and proposed a vision for Ireland in 2020 in which a well-educated and highly skilled population would contribute to a competitive, innovation driven, knowledge based and inclusive economy. In order to achieve this vision, the skills strategy outlined target percentages for the proportions of the labour force to be trained and educated to Higher Education, Upper Secondary and Lower Secondary Levels.

The Upskilling Coordination Group, established in 2007, provided a forum for providers of training and vocational education to exchange information and to discuss common issues.

He gave a new focus to the Upskilling Coordination Group by ensuring that the major interests were represented on it and that a new emphasis on activation measures for the unemployed was given to the Group.

He introduced new and expanded initiatives with his Senior Minister, to enhance training and further and higher education supports for the unemployed including the Labour Market Activation Fund, the Work Placement Programme, the Redundant Apprentice Placement Scheme and the Skills Development and Internship Programme.

He published the first National Skills Strategy Implementation Statement in March 2010 which concluded that significant progress had been made towards meeting the objectives set out in the NSS.

He introduced a package for the re-training of the former employees of SR Technics under the European Globalisation Fund.

He promoted the completion of the FÁS/IVEA National Cooperation Agreement to improve the coordination of effort and to facilitate better cooperation at local and regional levels among the relevant education and training providers.

He worked closely with his Senior Minister to clear up legacy issues in FÁS (Training and Employment Authority )by putting in place a stronger Board and corporate governance structure and had begun the process of reorganising the agency and giving it a new role and mandate to ensure the on-going implementation of the NSS.

DEIS (Delivering Equality of Opportunity in Schools), the action plan for educational inclusion commenced in 2005 and provided for a standardised system for identifying levels of disadvantage and an integrated School Support Programme.

Seán commenced an evaluation of the DEIS Programme to enable the preparation of a new framework to tackle the problem of disadvantage in our schools.

The National Education Welfare Board (NEWB) was the statutory body with responsibility for educational welfare including school attendance, participation and engagement.

He took the decision to integrate the Home School Community Liaison Scheme, the School Completion Programme and the Visiting Teacher for Traveller Service under the NEWB to provide a more effective service for children who may have difficulties fully participating in school.

The School Transport Scheme was a very significant operation involving over 135,000 children making about 42 million journeys every school year and travelling over 82 million kilometres on 6,000 routes to and from schools. It was delivered by Bus Éireann on behalf of the Department of Education.

In the 2007 Programme for Government a commitment was given to review the School Transport Scheme, including catchment boundaries.

Seán put in place revised school transport arrangements for children with special education needs to ensure that parents, children, schools, the National Council for Special Education, Bus Éireann and Special Needs Organisers were clear on the parameters and conditions of the scheme.

He initiated, finalised and implemented a comprehensive Value for Money Review of the School Transport Scheme. This was published in March 2011 and the consequent major reforms were announced in the 2011 Budget. Changes to the scheme included the abolition of the ‘closed school rule’ and the ‘catchment boundary system’.

He regularly stood in for the Minister in the Dáil and Seanad and at various functions and events. He attended many conferences, seminars and Further Education ceremonies throughout the country. He also was involved in a number of cross-border initiatives in the area of education as part of the ongoing peace process. In addition, he often represented the Minister at the Education, Youth and Culture Ministerial Council in Brussels, as well as at the OECD and UNESCO.

“We will raise the profile of the County Enterprise Board student enterprise awards and encourage second level students to participate in an enterprise related programme.”

Seán initiated the Seán Lemass Award for Enterprise in 2010. This award was presented to the top 3 finalists from the Student Enterprise Awards organised by the City and County Enterprise Boards and the Transition Year Mini-Company Get Up and Go Programme to encourage and support entrepreneurship among our young people.